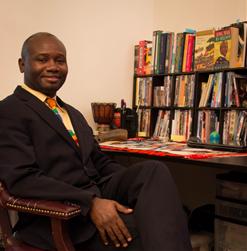 Harcourt Fuller is Associate Professor of History in the Department of History at Georgia State University in Atlanta. An historian of Africa and the African Diaspora, Dr. Fuller holds a PhD in International History (under the supervision of Odd Arne Westad and Antony Best) and an MSc (with Merit) in History of International Relations from the London School of Economics & Political Science (LSE). He also holds an MA in History, a BA in International Studies, an AS in Liberal Arts & Sciences, and a Certificate in Latin American Studies from the City University of New York (CUNY). He has conducted research, given invited lectures and presented conference papers in Africa, Europe, North and South America, and the Caribbean.

At GSU, Dr. Fuller’s undergraduate courses include Survey of World History - 1500 to Present, Africa and the World, and Western Africa. He also teaches a graduate Seminar in African History. In addition, Dr. Fuller is the founder and director of the Jamaica Study Abroad & Maroon Immersion Program. Dr. Fuller has also previously taught at Connecticut College, Emmanuel College, Florida International University, and was a Visiting Scholar and Visiting Researcher in the African American Studies Program and African Studies Center, respectively, at Boston University. Professor Fuller is committed to the intellectual advancement of all students and his courses incorporate the pedagogical principles embodied in the concepts and practices of Experiential Learning.

Dr. Fuller's publications include the monograph Building the Ghanaian Nation-State: Kwame Nkrumah's Symbolic Nationalism  (New York: Palgrave Macmillan, 2014), and the co-edited book Money in Africa  (London: Trustees of the British Museum, 2009). In addition to having published articles in peer-reviewed academic journals such as African Studies Quarterly, Nations and Nationalism  and African Arts, Dr. Fuller has also contributed several articles to popular print and online media publications, and has been quoted in prominent newspapers such as the New York Time, the Christian Science Monitor, and Le Monde  (France). He has also appeared on Deutsche Welle (DW) - Germany's international broadcaster, as well as United Nations Radio and United Nations Web TV.

As a scholar of Maroon descent, Dr. Fuller is currently undertaking a major interdisciplinary, collaborative and multi-faceted research project to interrogate the Maroon experience in the Americas. Beginning with the history and contemporary dynamics of the Jamaican Maroons, this international research project, which is being conducted in Ghana, Jamaica, Britain, Canada and the United States, includes the publication of books, journal articles, the production of documentary-films, digital humanities content, as well as web and social media material. In collaboration with Hollywood stuntman and film director Roy T. Anderson, Dr. Fuller created and produced the documentary-film Queen Nanny: Legendary Maroon Chieftainess, which was premiered at the United Nations Headquarters and the Schomburg Center for Research in Black Culture in New York City, as well as the University of the West Indies-Mona and the Maroon community of Moore Town in Jamaica's Blue & John Crow Mountains UNESCO World Heritage Site, in October 2015.

He lives in Atlanta with his wife, Dr. Christina H. Fuller, an environmental health professor, and their young daughters Kenya and Amina.

Please click on the menu bar above for more information about Dr. Fuller's research, pedagogy, public scholarship, community engagement, and other activities.