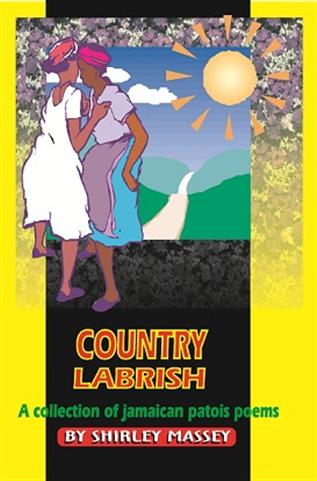 Dr. Fuller edited and wrote the introduction for Country Labrish: A Collection of Jamaican Patois Poems. First independently published by his Maroon Books imprint in 2001, and now revised and under consideration by a commercial publisher, Country Labrish is a book and double audio CD/MP3 of Jamaican Creole (Patois) poems, written and recorded by Maroon poet/spoken word artist Shirley Massey. The book is written and recited in a rural variation of Jamaican Patois. While her poetry is laced with humor, it nonetheless provides social commentary on important local, national, and international issues.  She uses humor and dialect in poetry to dampen the seriousness of everyday life and happenings. As Shirley says, “I find that the funnier the poem, the more the people love it. Hence, whenever I’m writing a Patois poem, I always pick themes in which people can find humor.  Sometimes I observe something happening to a person and I will twist their story around to make it sound funny and amusing.” Her style intertwines reality with imagination. In Shirley’s world there is a thin line between what’s real and what’s really funny.

Shirley Massey’s linguistic art form puts her in a select group of Jamaicans who have mastered the intricacies and nuances of their nation’s style of English and African-derived dialect and oral traditions. Her poetry is greatly inspired by the works of cultural giants such as the Honorable Louise Bennett-Coverley, Jamaica’s Queen of Patois poems, and the wit and humor of Oliver Samuels, Jamaica’s premier comedian. As an ode to the classic work of “Miss Lou,” Jamaica Labrish: Jamaica Dialect Poems by Louis Bennett (Sangster’s Book Stores, 1966 and subsequent editions), Country Labrish speaks to the people in a Patois dialect unique to the Rio Grande Valley Maroons of Portland parish.

In August of 2001, Shirley performed for the first time outside of Jamaica in front of hundreds of patrons at the Lincoln Center for the Performing Arts’ Out of Doors and La Casita Project, where she shared the stage with other poets and artists from Latin America and the Caribbean, Spain and the United States. She also recited her poetry at the Langston Hughes Library and on WHCR 90.3FM - Harlem Community Radio and other venues in New York City.  Jenneth S. Webster, Producer of the program, said that the event was “one of the most exciting projects which Lincoln Center Out of Doors has ever undertaken.” Webster also said that Shirley Massey’s performance was “unique and inspiring.” Furthermore, the Weekly Star (N.A.) wrote that “Shirley’s dramatic and charismatic delivery of poems on stage” captivates audiences wherever she performs.

Shirley Massey was born in the beautiful Parish of Portland, Jamaica, and grew up in the Maroon settlement of Comfort Castle. As a teenager, she discovered a passion for writing compositions and storytelling. Since 1996, Ms. Massey has been compiling scores of Patois poems - many of which are featured in Country Labrish, her first published work.

Click on the audio link to the left to listen to one of the selections from Country Labrish.